In the News Archives 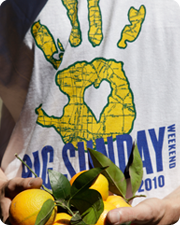 Big Sunday has always gotten lots of great publicity, for which we’re really grateful. We’ve been covered on the front page of the Los Angeles Times, La Opinion and The Daily News. We’ve also been featured in The Wall Street Journal, on NBC Nightly News, and in countless community, ethnic and religious publications. Here’s a sampling from over the years. For press inquiries, contact Rachel Schwartz at rachel@bigsunday.org or 310-990-2764.

Big Sunday’s concept is that everybody can give
The Press-Enterprise – April 26, 2009

This holiday season, focus is turning from wants to needs at area charities
Daily News – November 26, 2008

Calendar Girls Picks And Clicks For May 3-9
Jewish Journal of Greater Los Angeles – May 2, 2008

It Was Hardly A Day Of Rest Around Southland
Los Angeles Times – California Section Front – April 30, 2007

Back to In The News Index