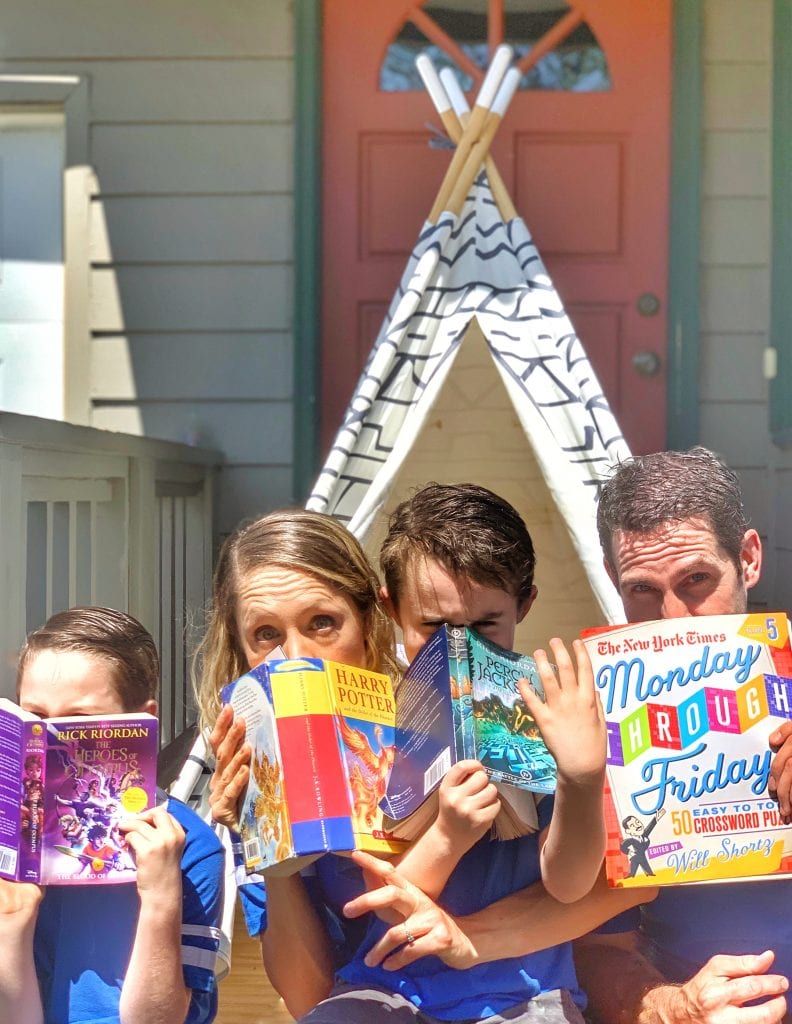 Big Sunday volunteers Minta Mullins and Dave Cooper, pictured with their kids, Winston and Truman, led virtual book reading sessions for families and arranged for meals to be sent to front-line workers at a hospital near them in the Valley. PHOTO BY CHARLIE HESS

Help. We’ve been living through a spring and summer where plenty of people in our community need it as we all come to terms with the devastating impacts of a health crisis around the world and systemic racial injustices here at home. But even these stormiest of clouds have a silver lining, lately displayed as a wealth of community activism and involvement.

L.A. is out there, doing good.

Not just on Sunday

When safer-at-home orders first went out in early March, David Levinson, founder and executive director of the L.A. nonprofit Big Sunday, thought he might be in for a “staycation” of sorts. No such chance, but he isn’t complaining. “I’ve never worked so hard in my life, nor has our staff, but it’s been a wonderful thing to be able to do,” Levinson says.

Big Sunday, which organizes more than 2,000 service projects and food, book and school supply drives each year, has seen needs change almost weekly as the pandemic unfolded. “When people were shut down, that meant different things for different people,” says Levinson. “It was a constant improvisation.” The organization has provided everything from food and diapers to meals for front-line workers and computers for children who needed them for distance learning. They started hosting virtual story times, magic shows, concerts and classes on social media, employing people like yoga and meditation instructors and entertainers, who have been particularly hard hit by the shutdown.

Through the Big Sunday Foot the Bill Fund, the organization has helped more than 1,100 households in need. Among them was a family in the Lincoln Heights area, living in a tiny, unairconditioned apartment so stiflingly hot that the 16-year-old son, a Lincoln High School student, couldn’t focus on his distance learning. Aydee Valle-Amescua, the school’s Healthy Start coordinator, and Hailey Taneda, assistant principal, reached out, and Big Sunday’s fund came through with an air conditioner.

“A lot of people’s jobs just ended in the middle of March,” says Levinson. “It was people in all neighborhoods, of all ages and from all parts of the economic spectrum.” From laborers to housekeepers, trainers, hairdressers, photographers and entertainers, “suddenly, they had no income and a lot of people didn’t have savings to support them.” The fund covers bills of $100 or less and Levinson says he has heard from people who said, “I never thought I’d be in this position” and “As soon as I’m back on my feet, I want to pay it forward.”

Big Sunday’s daily newsletter is packed with current ways to help out and stay connected. Starting July 1, Big Sunday headquarters on Melrose Avenue in Hollywood will also be open from 10 a.m.-noon weekdays so that people can drop off donations. “What we have tried our best to do is to see where the needs are, to see where they’re needed most and to try to meet them wherever we can,” Levinson says. The killing of George Floyd at the end of May brought a new focus, for instance, on Black-owned businesses and ways to get involved with things such as prison reform. “That just changed the discussion,” says Levinson. “What people are interested in and where people’s hearts and minds are became different very, very quickly.” 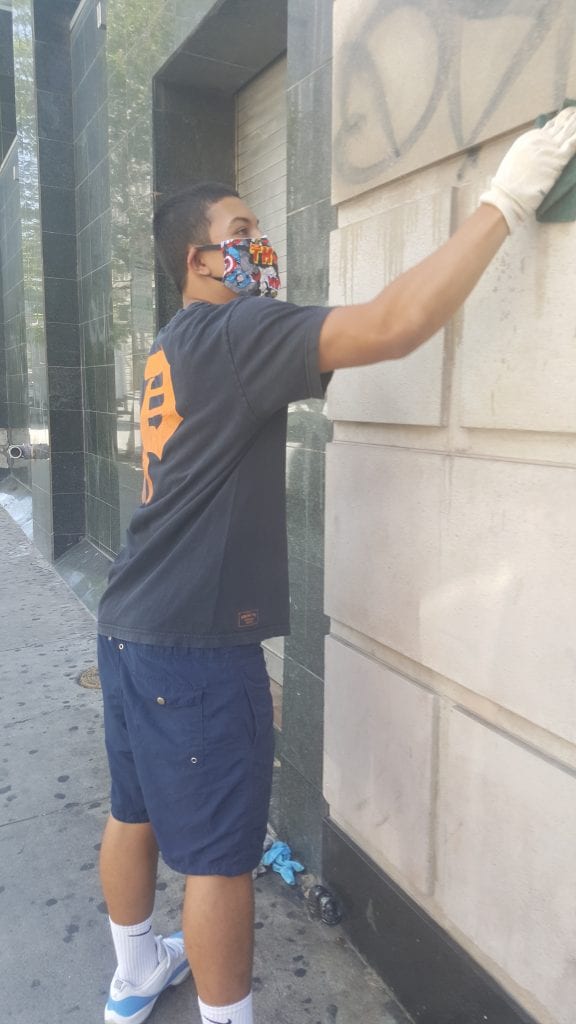 The protests and unrest following Floyd’s killing created more opportunities for Angelenos to show their good hearts. One of those who heard the call was Jessica Villela, a single mom from Glendale. Her household, including four kids ages 9-24, is not new to volunteering. “It’s very important in our household to be involved with our community and to really educate the kids to give back and to try to make a difference, because it really starts with us,” she says.

She’s part of the business resource group at Warner Media, and says the company encourages and supports volunteerism. Through work, she learned of a neighborhood cleanup effort hosted by the nonprofit L.A. Works that would be taking place June 2, also known as “blackout Tuesday.” She had participated in cleanups with L.A. Works before, and this time signed up with her 18-year-old son, Andrew Lopez, a Glendale High student who graduated June 10.

Villela says the family had been following current events, and she has been talking with her children about the issues surrounding Floyd’s death and the Black Lives Matter protests. Though her family doesn’t live downtown, she says they often eat and shop at Grand Central Market, the location of this particular cleanup. “I signed us up to help the businesses, the community,” she says. Her oldest son volunteered to look after her two youngest children so that she and Andrew could attend.

As they headed to the cleanup, at 5th and Broadway, there was still unrest in the community, and she says Andrew was a little nervous. She reassured him that L.A. Works organizers wouldn’t put them in harm’s way as they removed graffiti and cleaned up debris. “As long as we’re there just to make a difference, that’s all that really matters,” she recalls telling him. This turned out to be correct. “L.A. Works was wonderful,” says Villelas. “They had everything set up. They had gloves and they had all the materials, and guided us, and we were able to clean up and do our job.”

The timing of this day of service was especially meaningful to Villelas. “I think it was so empowering for Andrew because he leaves for the military in a month,” she says. “It’s important that he’s out there, that he knows what’s going on, because he is venturing into being a young adult and I want him to advocate for himself. I think the community coming together was an enlightening experience for him.”

Andrew later thanked his mom for encouraging him to volunteer. “I think it was a great experience for him, so he could see what’s going on outside of what you see on television,” says Villelas. “I know he’s definitely going to remember this moment.” 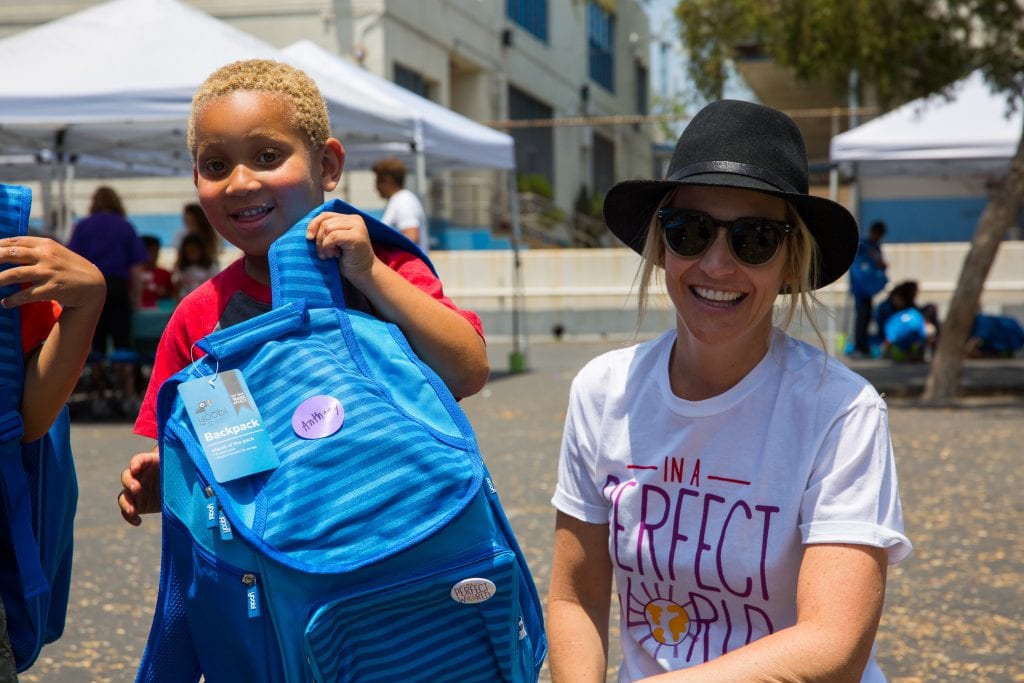 One of the signature projects at In A Perfect World is a backpack drive started by two L.A. volunteers, with all the funds raised by the kids. PHOTO COURTESY IN A PERFECT WORLD

Times like these make lots of people stop to consider their children, the future and what a perfect world might look like if they had the power to create it. The nonprofit In a Perfect World works to put the future directly in children’s hands with a mission of youth empowerment. “We’re working to convert idealism into action for kids of all ages,” says the organization’s spokesperson Stephanie Griffin.

This effort begins with “Dreamcatchers” ages 5-12, who participate in “Everyday Kindness” activities that encourage them to begin to understand that others might not have what they have, and to engage in service. “We’re working with their default mode as children of being empathetic toward others,” says Griffin, who is the mom of a 6-year-old. These are generally family activities and, after the coronavirus pandemic began, the organization made all of the projects available free on its website.

The projects, some of which include downloadable PDFs with simple instructions, cover everything from creating “pay it forward” packages to writing thank-you notes to delivery workers, painting “love rocks” to scatter through neighborhoods and discussing bias and hate. New projects are added regularly to address current circumstances.

These early acts of service groom participants to become “Youth Ambassadors.” As part of this two-year curriculum for ages 13-18, ambassadors have weekly meetings with their program manager and mentor, and participate in service activities on an almost weekly basis. Recent youth-led projects have included creating care packages for nurses and caregivers, offering grocery delivery to isolated community members and adopting a nursing home. Projects are created based on the ambassadors’ interests, and this program is also now offered virtually.

In mid-June, IAPW hosted an online town hall for Youth Ambassadors, led by social equity author Kevin Powell, along with ambassadors in L.A., Minneapolis and Washington, D.C. On the agenda was discussion of recent protests, racial inequality and police brutality and “safe and effective ways that ambassadors can be part of the solution in their communities,” Griffin says.

Coming up locally is the organization’s backpack drive, in partnership with the Los Angeles Unified School District and L.A.’s Best. “Two of our youth, our younger generation, in L.A., were very disturbed by what they saw with income inequality and discrepancy in how kids are provisioned for school,” Griffin says. They inspired the drive, which has been going on for four years, with the fundraising done by the kids themselves. “This is so cool, because this is youth led, it’s a peer-to-peer campaign,” says Griffin.

The idea, however, goes beyond addressing any one immediate need. This is a drive to change perspective from the very youngest ages. “We do one or two of these activities a week, and I’ve already noticed a change in my 6-year-old,” says Griffin, “in how we talk about things and how she looks at other kids and other people and how they may be feeling.”

In a perfect world, these changes would last a lifetime. “They’re not just taking part in one fundraiser, and they’re not just doing one service activity, they’re really getting a training on how to be a change maker,” Griffin says. “We’re betting on the future.”